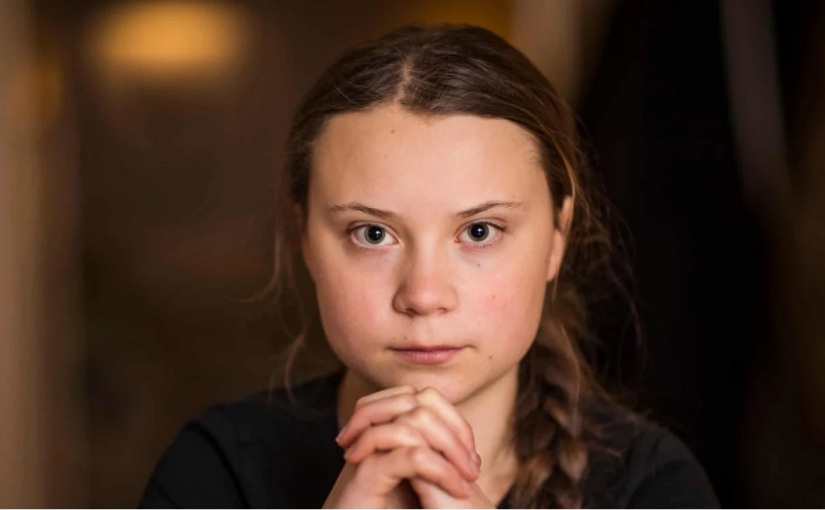 Let’s start with the explanation of my work:

It’s a holistic practice that reads each “piece” of the face as part of a whole, with every feature having an upside and a downside, so it’s compassionate, not judgemental.

Before we get to Thunberg’s face, I need to add a disclaimer: I don’t know that much about her. Except,  she is a climate change activist and she is autistic.

This is what her face says to me:

When you come to know CFR, after a while, you can start to see themes in someone’s personality.

From Thunberg’s face I know that she is quick thinking and makes her decisions swiftly, based in the moment – her eyebrows are peaked and slanting upwards. The up slant of her eyes communicate something similar, she is an optimist who can see more possibilities in any situation.

Her canthi (the shape of the flesh around the tear duct) are pointed which again denotes a quickness in words and speech, and precision too. No beating around the bush with her. On the downside, this can mean she is too sharp and too quick with her words.

There’s also a theme of stamina, a lot of it! The bridge of her nose is very broad and her lower cheeks are very full, both are a sign of someone who can keep going and going well after others have popped out for a break (or even a nap).

So no signs of climate activism so far. Where is it then?

When doing a face reading I incorporate information from the face and the patterns in their birth date.

What Thunberg’s birth date tells me is that she has this remarkable sensitivity that allows her to mirror someone’s energy and take other’s energy as her own.

She is someone who feels sick when a friend in a bad mood walks next to her. She’s someone who avoids shopping malls, busy streets and crowded small places as the invisible stress picked up from the people is very unbearable. And someone who twitches at the sight of a painting two milimetres out of place.

This can mean a propensity for perfectionism, idealism and/or high standards. Chinese Medicine relates this pattern to heaven or the skies, a high up place.

Thunberg’s commitment to her activism could be born out feeling the pain of the environment as her own (because of her sensitivity) and in accord with what’s right, her high values.

Usually, when someone has high standards, they have a black and white approach to things. It’s either the best or it isn’t. Anything lower than their standards, they’re just not interested in pursuing or having in their life.

Another pattern Chinese Medicine associates with this is metal, which slashes and cuts, which is exactly what high standards do.

There is so much more that I can say but we’re already at 500 words!

See you next week,

This site uses Akismet to reduce spam. Learn how your comment data is processed.